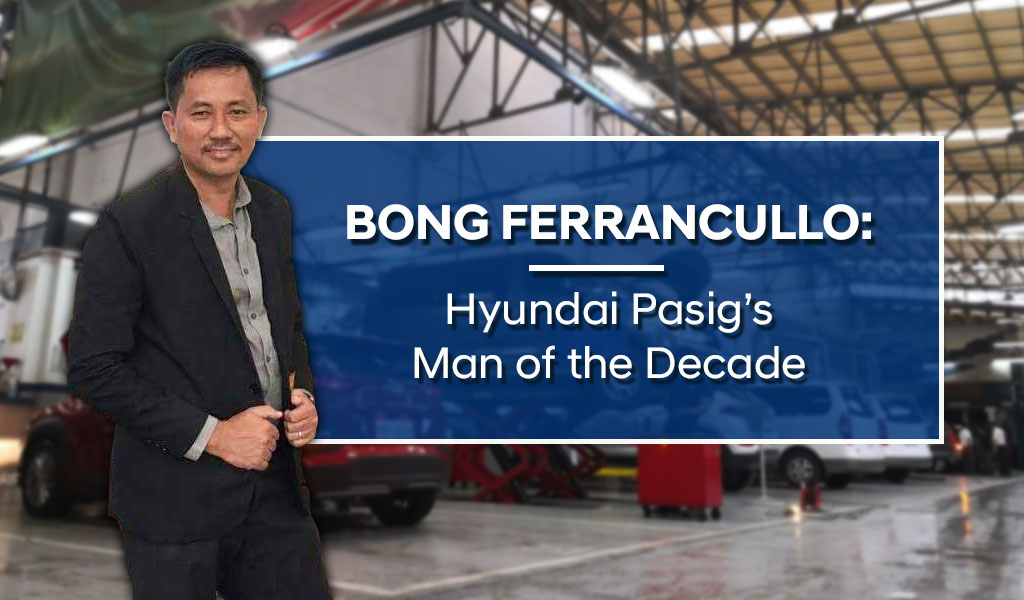 Anthony I. Ferrancullo, or Sir Bong, as he is fondly called, built himself as one of Hyundai Pasig’s longest serving and best service advisors. He definitely isn’t what he appears to be at first glance.

When he first walked in to our meeting room, he looked a bit out of his comfort zone.

It was a bit obvious that he wasn’t used to talking about himself, and as the hours went on, it became clear why — Sir Bong was one of those people you’d read about on the news, or maybe watch on feel-good telenovelas on the weekends.

Sir Bong lived humble beginnings up on a farm, as his parents were both farmers who owned a small piece of land. They weren’t rich by any means, but still managed to get by and go to school, and had an overall pleasant childhood.

Having eleven siblings, it really is no surprise that he would also want a large family of his own. Sir Bong has eight children, now happily with two grandchildren.

After having four daughters one after the other, Sir Bong laughingly recalls how he said he wouldn’t stop trying until he had a boy; luckily, he had three.

In his student years, Sir Bong would travel to Manila to visit relatives who lived in the city, and worked a part-time job to earn a bit of extra money on the side. But little did he know that his job would eventually lead him to his lifelong career.

Sir Bong was studying a vocational course at a small school called Tolentino Technical College, what he described as TESDA back in the day.

The school eventually closed down before he could finish his studies, but Sir Bong always looked at it in a positive perspective.

Sir Bong talks fondly of his early years in the business, having started out in 1992 as a working student, saying he was ultimately inspired by his coworkers’ continuous support.

He started out under Bonifacio Motors Inc. under his boss, Rudolph Bonifacio, who he fondly refers to as Sir Bonifacio, and built a relationship with his boss that went above and beyond the normal boss-employee relationship.

If there was one thing Sir Bong showed his employer, it was his determination and loyalty.

Sir Bong started out, like many others, much further down the corporate ladder. He did reception work, but showed a lot of promise that he was trained to perform tasks that gave him more time with his clients.

Sir Bonifacio would come to realize that this was the best decision he would make for the company, as Sir Bong turned out to be a natural.

Sir Bong had many talents that built his career as an advisor. One of them had to do with his brand of customer service; he was able to build such a good rapport with his clients, that even non-Hyundai car owners would bring their vehicles to him for consultations.

At a point in his career that he wasn’t at the front lines anymore, clients needed convincing to come back, as a lot of them didn’t want to deal with anyone other than Sir Bong.

He even started training the newer advisors who would soon take over the clients’ needs, if only to assure them that he was passing them on to good people.

Even as he was telling stories of his time as an advisor, his phone would ring time and again from clients who were looking for his advice. He had to step out a few times during his interview as he couldn’t leave a client hanging, after all.

A talent that proved useful to Sir Bong during his days as a service advisor was giving a vehicle a once-over and being able to tell if it was brand new or not, if it had been refurbished or not, or if it had been in an accident or not.

In the decades he has spent with Hyundai Pasig, and even before it became that, Sir Bong was able to prove that he was one of the best at his job.

Sir Bong has been with the company for almost three decades, yet is still driven as ever in the field. He loves learning, and this is made evident with his eagerness to study up on the newest car trends that come in to his shop.

His eldest daughter, who also works at Hyundai Pasig, described her father as a workaholic – always has been since she could remember – but lovingly adds that he only wants the best for his ever growing family.

Almost three decades in the business and Sir Bong has not only grown as a person, but as Hyundai Pasig’s most trusted advisor, known by both colleagues and clients alike as the guy you go to if you have an issue with your vehicle – whether it’s a Hyundai car or not.